Nanotechnology is the exciting field that is enabling solutions in alternative energy, medical diagnostics and therapeutics, next generation wireless communications. The Master of Science in Engineering degree in Nanotechnology prepares students to take leadership roles in emerging high tech industries as well as traditional industries that exploit nanoscale phenomena. This interdisciplinary program draws on world recognized faculty and courses in the School of Engineering and Applied Science, the School of Arts and Sciences, and the Wharton School.

Nanotechnology is the application of the science of the very small to produce new, interesting, and useful materials, devices, and systems that exploit the unique features of this small size. When things are small, their behavior can be governed by unusual physics, such as quantum mechanics or non-continuum mechanics, and this new physics can be used to cause and exploit behaviors that would not be possible at larger scales.  Examples of this include so-called ‘low dimensional’ devices that can produce transistors that operate faster than silicon transistors, or quantum dots that have application ranging from video displays of remarkable color purity to assisting in the detection of cancers inside the body. However, that is not all that nanotechnology can do. When things are small, they can be arranged into systems of remarkable spatial and functional complexity, even if their behavior is entirely governed by macroscale physics. An example of this area is microelectromechanical systems, or MEMS: these systems can range from millions of tiny moving mirrors on a silicon chip that digitally project Hollywood’s latest films in the movie theater, to extremely small scale gyroscopes and accelerometers that can fire the airbag in your car if you are in an accident to keep you as safe as possible. And keep in mind these few examples barely scratch the surface of this exciting field.

In order to contribute to this dynamic field, a core knowledge that spans several academic disciplines is necessary.

Understanding how to design, fabricate and control devices with nanoscale dimensions will drive innovation in almost every technology sector. Advances based on phenomena at the nanoscale impact technology through two pathways. Evolutionary advances result in significant improvements in existing technology as nanostructures are incorporated. Examples include computer processor chips, coatings for buildings, and components in cell phones. Revolutionary advances occur when the ability to control nanoscale phenomena enable new technology solutions. Examples include targeted drug delivery, chemical sensors, microelectromechanical systems, and light emitting diodes in display screens. It is estimated that nanotechnology innovations will eventually represent ~$2 trillion of the gross domestic product.

Nanotechnology plays a critical role in both alternative energy generation and energy conservation. Many strategies for alternative energy generation involve nanoscale phenomena. Efficiency of solar cells, lifetimes of batteries, and effectiveness of fuel cells depend on the control and optimization of nanoscale interfaces with these devices. Self-cleaning coatings are required for continued performance. Energy conservation can have a tremendous impact on global energy requirements. The miniaturization in electronic devices enabled by nanotechnology advances yield lower voltage and lower power consumption, resulting in energy savings in consumer electronics. Optical quantum dots and other nanoparticles are the basis of high brightness energy efficient lighting.

Nanotechnology will be at the forefront of innovation in the delivery of health care. The digitization of medical information will rely on a variety of new and existing digital devices. Small-size, externally-wearable and internally-implantable medical monitors will interrogate the body and transmit information wirelessly to physicians, who can then better guide treatment of medical conditions. Bedside diagnostics require new strategies for sensors and analyzers that can be integrated into handheld devices. Rapid and local gene/ protein sequencing that rely on mass-fabricated nanoscale sensors will be the basis of personalized medicine.

Nanotechnology has been at play in the development of electronics for nearly a decade. Minimum feature sizes in computer chips today are on the order of 10 nm. However exciting advances in this arena are leading to revolutionary strategies for electronic devices. Flexible circuits are folded up into the interior of digital cameras. A new field has arisen in which light is used as the basis of ‘plasmonic’ devices. Tiny resonating nanomachines are the basis of channel separation (and the ability to support high bandwidth) in wireless phones. The entire concept of how a computer ‘computes’ is being questioned as the potential of nanotubes, nanowires, and nanofibers as possible electronic components is being explored. Ultimately, quantum computing, which relies on nanotechnology to isolate the quantum behavior at the smallest scales, could result in tamper-proof communication and a need to rethink the entire architecture around the security of information. 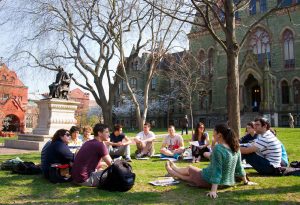 Penn’s campus is located in Philadelphia, one of America’s most historic and livable cities.  Founded by Ben Franklin, Penn has a heritage of intellectual curiosity and a commitment to contribute.  All of the schools of the university are co-located on a single urban campus in a combination of historic buildings, spectacular modern architecture, and wonderful green space.  Take a virtual tour of the campus and/or see our pool of images on Flickr.

Being located in Philadelphia, students have immediate access to all that the city offers:  world-class theater and symphony; art and science museums, championship sports; and the nation’s largest urban park along the Schuylkill River.  Get to know the City of Brotherly Love.

Welcome from the Director

Thank you for considering graduate study at the University of Pennsylvania! As one of the nation’s premier nanotechnology programs, with significant ties to Penn’s medical and business schools, and located in the vibrant and historic City of Philadelphia, we can help you prepare for a career in this exciting new field. Whether your interests are to gain nanotechnology specialization expertise on top of a traditional undergraduate degree, prepare yourself for PhD research in nanotech-related fields, gain hands-on laboratory experience in nanotechnology, or learn principles of nanotechnology for knowledgeable management or investment in nanotechnology concerns, our program can help.  We look forward to sharing more about our program with you.