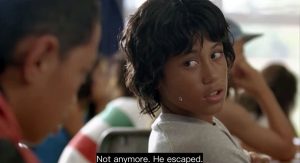 Boy is an emotional and educational journey that depicts the coming of age story of a young boy in New Zealand set in 1984 and depicts the relationship between the boy (James Rolleston) and his absentee criminal father (Taika Waititi).

We were thrilled to reconnect with our fellow Nano Quakers and received some great comments for the movie event and future events. We share some of our impressions [warning…possible spoiler alert!]:

“Very impressive movie and novel performance techniques. In the movie the mood of the characters is shown by children’s hand drawing. When the father, the tough guy, stands by the tomb of his dystocia wife, his caricature image has been flying to the top of the tomb, tears pouring down. When the youngest son (who always thought his superpower was responsible for his mother’s dystocia) came to the grieving father with fireworks and skates and said sorry for doing that to his mother.  And ‘boy’, the leading role, he found the money his father had been looking for by accident. But the money was eaten by the goat. And when he hit dad, let him realize the reality. These scenes are delicate and powerful, and after the movie we discussed a lot, which let’s find out the flash point of small budget movies. This movie night is a very worthwhile activity.”

“Movie wonderfully balances the depiction for the boy’s mature and childish sides in representing events inside the movie.”

“I have seen this director’s short film Two Cars, One Night. The story is a bit like Nobody Knows and September. The basic problem to deal with is the echo of the counter cultural movement in the 1960s in the 1980s, and the proposition of the relationship between father and son continues. Photography is very particular in this movie.”

“The movie has a very educational ending, after all the hard time, the boy finally came to realize that the father was not the role model he was looking for. It was not only heartbreaking for him but also a learning experience. I particularly enjoyed the story telling of the movie. The movie was told on the perspective of naive child, we can really see some innocence thoughts and boy’s fantasy, so it was educational and funny at the same time.”

All current Nano-MSE students are part of NanoQ and added to the student listserv. The listserv is the forum for group exchange.

Interest in joining the team, suggestions for events and specific queries can be directed to the contact below, which forwards to the current student group committee.

Welcome from the Director

Thank you for considering graduate study at the University of Pennsylvania! As one of the nation’s premier nanotechnology programs, with significant ties to Penn’s medical and business schools, and located in the vibrant and historic City of Philadelphia, we can help you prepare for a career in this exciting new field. Whether your interests are to gain nanotechnology specialization expertise on top of a traditional undergraduate degree, prepare yourself for PhD research in nanotech-related fields, gain hands-on laboratory experience in nanotechnology, or learn principles of nanotechnology for knowledgeable management or investment in nanotechnology concerns, our program can help.  We look forward to sharing more about our program with you.